Favorite Warriors of My Life Time

I have followed the Golden State Warriors since I was a kid. My devotion to the team started in the early 90’s, maybe around 8 or 9 years old. There hasn’t been too many winning seasons around these parts, 7 since 1991 to be exact; so individual players stand out for me. Mostly for being brave enough to try and make a difference or helping to turn this franchise around. Here’s a list of my favorite Warriors in my life span…so far:

Captain Jack gets this party started. One of the big reasons for the turn around of this franchise, and the proverbial planting of the seed of what a good team in Oakland would look like–during the so called “We Believe” era. Stephen Jackson brought toughness, grit, and leadership, to a place that that possesses the same qualities and to a fanbase that needed it.

The consummate professional that is Mr. David Lee, was appreciated during his tenure with the Warriors. His career averages in Oakland were 16 ppg and 9.3. However there was a stretch where he averaged 20 &10 and was as much an integral part of the Warriors leap into greatness as Steph Curry was. And for the record he deserved that contract. Plus he was an Allstar, first for him and first since 1997.

Think about this: 1997 the Warriors last Allstar was this man. Before the braids, before coaches were getting chocked, and before claims of not being able to feed his kids  this man was beasting! In his Allstar year Sprewell averaged  24 ppg and 5 ast. In the open court it was show time! But Latrell went Latrell, and the rest is history. He was fun to watch when he was here though.

Over 20,000 points 8,154 rebounds in his career, in case you weren’t aware of his productive 17 year career. He spent 5 of those seasons with the Warriors. His best year was the 2000-01 season when Jamison averaged 25 points and 9 rebounds per game. Including when the king of the flip shot scored back to back 51 point games. Even put up 50 on Kobe

From Brooklyn to Oakland. Mr. Warrior himself came to Northern California at the age of 22 (1986) and left; and by left I mean traded for a back up center, at the age of 33 (1997). Had one more stint 4 years later but it wasn’t the same. When Mullin was in his prime he was a scoring machine. Averaging more than 25 ppg for five straight years at one point, keeping fans like me glued to the tv. Holding his own before and after Run TMC.

There isn’t a soul on earth who can tell me anything about Monta Ellis. Nothing you hear me? Ellis was one of my favorite players to ever step foot in Oakland. Scooter or no scooter, he was exciting, explosive, and played with the heart of a 6’8 forward. When the organization traded the great Jason Richardson, he tried to put the team on his back. Somebody had to do it, shit. Monta spent 7 years with the Warriors before they traded him for an injury prone big man that the bandwagoners here loved. He’s still the man to me.

I know, how can 2x MVP, NBA champion, and the new face of the Association come in at #4? Because it’s my list that’s why, make your own. Yes, Steph helped bring a championship to Oakland for the first time since 1975, and yes he may be top 2 or 3 most unguardable players today. But as far as Impact on my life, he hasn’t done it long enough. He’ll climb higher if he keep performing like regular season Steph….and fall lower if 2015 or ’16 NBA Finals Steph ever shows his face again.

Let’s talk about the original Beardsman of the NBA. Baron’s beard rose to prominence well before a certain fella in Houston made it cool. B-Diddy changed the culture of this franchise like I have never seen around these parts. I can’t recall the last time I literally celebrated a trade, before or since.  He was the Conductor of the We Believe train, and this dunk made everybody scream like Mike Tirico! 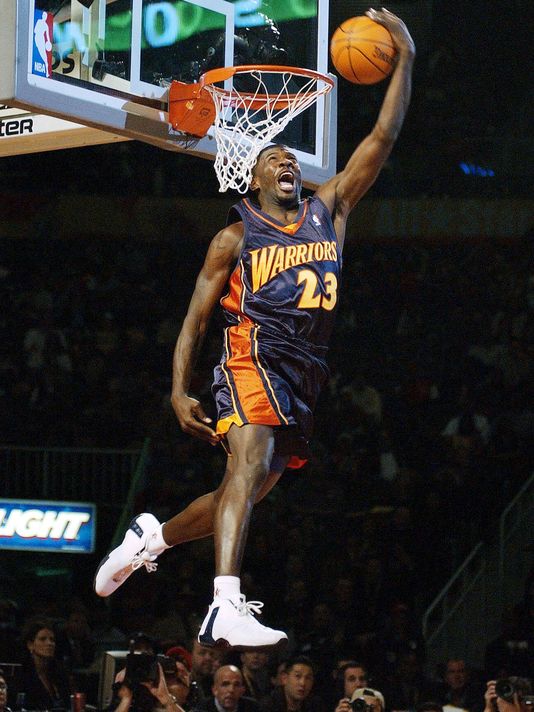 2x NBA slam dunk champ (should have been 3), over 8,000 points scored as a Warrior, 2,363 rebounds, 1,394 assist in 438 games in blue and orange. If his jersey doesn’t get retired I’ll personally cuss someone in upper management out. He (and Antwan) was the only thing consistent for a number of years here. He brought excitment, he was much see TV. For all you new Warriors fans, tried and true fans, and new generation I’ll just leave you with this:

The sole reason I wanted to play point guard growing up. We talking about the king of the Killer Crossover. He didn’t invent it, but he perfected it.  I’ve watched Tim cook opposing guards, big men,  forwards,  hell ya momma could have got her ankles broken too if she stepped on the floor. Once he perfected the shot off the dribble it was nothing you could do about it. Shit he was what Steph Curry would have had to become if he played in the 90’s. When Tim played in Miami I rooted for him too, and I root for his son to have an impactful  career just like his pops.